Is Your Product Viable? A Case Study on Decision Making 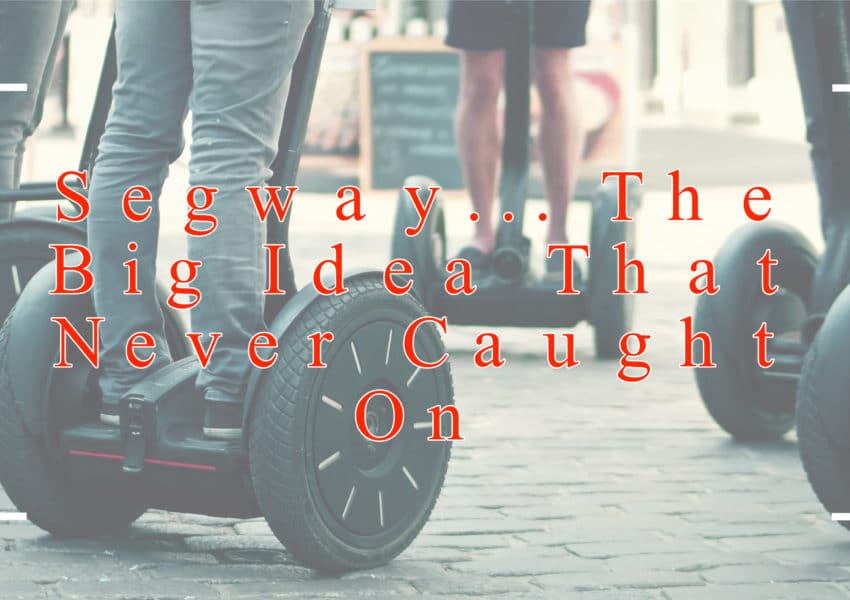 Segway… The Big Idea That Never Caught On

At the turn of the century, an invention took Silicon Valley by storm.  Steve Jobs called it the most amazing piece of technology since the personal computer.  Enamored with the prototype, Jobs offered the inventor $63 million for 10 percent of the company.  Amazon founder Jeff Bezos took one look at the product and immediately got involved, telling the inventor, “You have a product so revolutionary, you’ll have no problem selling it.”  John Doerr, the legendary investor who bet successfully on Google and many other blue-chip startups, pumped $80 million into the business, predicting that it would be the fastest company ever to reach $1 billion and “would become more important than the internet.”

The inventor himself was described as a modern Thomas Edison—he already had a track record of remarkable breakthroughs.  He projected that within a year, sales of his newest product would reach 10,000 units per week.  But six years later, they had sold only about 30,000 units in total.

This is how author Adam Grant described the saga of the Segway, the self-balancing personal transporter, in his book, Originals.  Grant goes on the say, “Time called it one of the ten biggest technology flops of the decade.”  He quoted John Doerr as saying, “Segway as an investment was a failure, no question about it.”

But how could some of the world’s most successful business people be so wrong?  How could a product, touted as the next technology revolution, not deliver?  Furthermore, why did an inventor with a track record of successful inventions, miss the mark in such a profound way?

The answer lies in the decision-making process about product viability.  Decision making is the process of selecting the best choice among several alternative possibilities (Wikipedia).  In business, the best choice is driven by the best information, data, and facts you can get.  In the case of the Segway, the seasoned business persons and the inventor abandoned all the principles of decision making that made them successful by allowing emotion/intuition/hubris to drive their decisions.

From the outset, the Segway was headed down a path of failure.  Let’s start our examination of the Segway’s journey by observing the inventor, Dean Kamen.

Kamen is well known for his inventions in the medical device industry.  “His portable dialysis machine had been named the medical product of the year, his portable drug infusion pump reduced the time that patients were stuck in hospitals, and his vascular stent is connected to [former] Vice President Dick Cheney’s heart,” as Grant described in Originals.  He holds over 440 patents and his experience as an inventor has taught him that testing variations of products and securing objective feedback are essential before introducing a product to the market.  But in the case of the Segway, he did neither.  He chose the Segway without considering other possible solutions to transportation problems.

Here’s how Grant describes it, “When developing the Segway, Dean Kamen didn’t open the door to this kind of feedback. Concerned that someone would steal his idea, or that the fundamental concept would become public too soon, he maintained strict secrecy rules.  Many of his own employees weren’t allowed access to the area where the Segway was being developed; only an elite group of potential investors had a chance to try it out.  Grant goes on to say, “…his team generated a wide number of ideas, but didn’t have enough critical input from customers to make the right choices for the final product.”  Kamen was so enamored with the novelty of his invention that he assumed consumers would trade their current modes of transportation (i.e. cars, buses, etc.) for the Segway.  Consumer feedback would have informed Kamen that Segway’s shortcomings i.e. no storage, inability to transport more than one person, speed, etc. made the invention far less than a substitute or replacement for the car.  At best it was a substitute for biking or walking but at $5,000-8,000 per unit, the product was not a practical choice for most consumers.

In addition, the product possessed the ultimate new product killer—“a change in consumer behavior.”  Randy Komisar, an entrepreneur, senior counsel at Apple, CEO at LucasArts Entertainment was an early skeptic. He didn’t view it as a product for ordinary consumers, Grant writes. Komisar states, “It’s a huge change of behavior at a very high expense with limited value beyond the wow factor for anybody with two feet.” Instead of a replacement for the car, he suggested focusing the product’s usefulness for golf courses, postal services, police departments, and Disney parks.  But even with this shift in focus, Grant found Komisar to still have serious reservations.  He quotes him as saying:

I still looked at it (Segway) as a very significant change of behavior at a very significant cost.  It wasn’t clear to me that this would improve a mail carrier’s productivity, or that that was the goal for the postal service…On the golf course, people drive electric carts around all day long.  Why will they use this instead”

The lack of objective feedback from market testing prevented a true assessment of the Segway’s viability, which ultimately resulted in false conclusions related to its market potential.

What about the investors?  Where did they go wrong?

Here are some answers. As humans, we sometimes make decisions based on emotions, enthusiasm, intuition.  However, in business, these characteristics, when misplaced and substituted for sound decision making can prove disastrous.  In the case of the Segway, it did.  One of the fundamental principles in the decision process on product viability is knowledge of the business/industry (Grant calls it “domain experience”). Jobs, Bezos, and Doerr allowed emotion, enthusiasm, and intuition to replace this fundamental.

The investors in the Segway did not know the transportation business.  As Grant points out,

“Jobs specialized in the digital world, Jeff Bezos was the king of internet retail, and John Doerr had made his fortune investing in software and internet companies like Sun Microsystems, Netscape, Amazon, and Google.  They had been originals in their respective arenas, but being a creator in one particular area doesn’t make you a great forecaster in others.  To accurately predict the success of a novel idea, it’s best to be a creator in the domain you’re judging.”

In other words, you must have knowledge of the business/industry where you are creating a new product and making a financial investment. Not only did the investors not have knowledge of transportation, neither did Kamen, the inventor.  No one took the time to really study the transportation business to assess the Segway’s usefulness.  All of them were caught up in the novelty of the product.  In Originals, Steve Jobs reaction is explained this way:

“The first time Steve Jobs stepped on a Segway, he refused to climb off.  When Dean Kamen gave other potential investors a turn, he begrudgingly handed it over, but soon cut in.  Jobs invited Kamen for dinner, and as journalist Steve Kemper tell it, Jobs “thought the machine was as original and enthralling as the PC, and felt he had to be involved.”

Like the inventor and all the other inventors, Jobs’ evaluation and due diligence ended at the threshold created by his emotion and enthusiasm. Feeling good about a product/service does not make it a viable product for the market.  Grant states, “The Segway was an engineering marvel, and riding it was a thrill.” To further emphasize the point, he quotes Bill Sahlman (Harvard entrepreneurship professor) as saying, “It was like a magic carpet.  It was transformational as a product.  But products don’t create value.  Customers do.”

It’s okay to feel excited about a product or business idea.  It’s not okay to allow that excitement to drive your business decision making. Misplaced enthusiasm in the decision-making process, especially when it cancels out knowledge of business/industry/market, is a sure recipe for failure.

Enthusiasm/emotions were not the only culprits that led to the decisions about the Segway.  Relying on intuition distorted the decision process also.   “Steve Jobs was famous for making big bets based on intuition rather than systematic analysis,” Granted stated when describing Jobs’ decision making.  However, in the case of the Segway, a major component of “intuitive” decision making was missing: experience with the product and business.

Jobs was a genius when it came to digital products. The foundation of his intuition consisted of years of experience and knowledge about the business/industry/market.  In sighting research on the topic of intuition and decision making, Grant explains:

“Our intuitions are only accurate in the domains where we have a lot of experience…If you don’t know anything about [a product], your intuition isn’t going to help you.  In dealing with unfamiliar products, you need to take a step back and assess them.  Non-experts make sounder judgments when they conduct a thorough analysis.  When Steve Jobs had a gut feeling that the Segway would change the world, he was seduced by an impulsive attraction to its novelty rather than a careful examination of its usefulness.”

Even in the face of Komisar’s analysis of the facts regarding the Segway, Jobs remained steadfast about his intuition, stating, “If enough people see the machine, you won’t have to convince them to architect cities around it.  People are smart, and it’ll happen.” He was wrong. The fact is, blind intuition seldom results in sound business decisions.

The reliance upon intuition also produced a by-product for bad decision making, hubris.  That is, I know because I have been successful before. In describing Komisar’s assessment of Jobs, Grant quotes him as saying, “There’s a hubris that comes with success.” Grant goes on to say Komisar’s observation led him to conclude that had he pushed back harder with his concerns, Job’s response would have been, “You just don’t get it.” Grant describes the peril of hubris this way:

“The more successful people have been in the past, the worse they perform when they enter a new environment.  They become overconfident, and they’re less likely to seek critical feedback even though the context is radically different…with his track record for proving naysayers wrong, he didn’t bother to check his intuition by gathering input from enough creators with relevant domain (industry) knowledge.”

Past Results Are Not A Guarantee of Future Success

Past success can be intoxicating, and that can result in a drunken perception of one’s abilities. That drunken state can cause you to look past the approaches, actions, and processes that lead to your success.  Basing the evaluation of the Segway on the past successes of other endeavors that had nothing to do with that product, leading to bad decisions related to its potential.

Emotion, intuition, and hubris, we all experience these traits in some form or fashion during our lives. But, when misplaced in the business decision-making process, they can lead to perilous consequences.  Even seasoned business people, the likes of Steve Jobs, Jeff Bezos, and John Doerr, are not immune to the business failures that are the result of bad business decisions. If these successful entrepreneurs were led astray by emotion, intuition, and hubris, certainly you can be victimized by the failure they produce.

The foundation of your decision-making process must be customer/market feedback, business and industry knowledge, and diligent analysis. After all, these are the principles that made Jobs, Bezos, and Doerr successful originally.

What's your take? Do you let emotion/intuition/hubris impact your business decisions?

Let me know your thoughts in the comments below.

1 thought on “Is Your Product Viable? A Case Study on Decision Making”

This site uses Akismet to reduce spam. Learn how your comment data is processed.

Earl Boyd is the owner of The Prime Group, a strategic planning and marketing services firm, creator of the 5 Step Business Start and Director of Entrepreneur Services at Entrepreneur Works. (more about Earl...)